Work is progressing on the new Charter Edition REFERENCE DIGE5T--a unique reference source which will enable you quickly to look up crucial background on countless current and coming events as they develop.     We are trying to make it virtually an encyclopedia of ready-reference facts on the otherwise hidden underlying forces behind current events. We are not aware of any other reference source like it in the world.

For those who watch the news closely and refuse to be manipulated by it, we believe the REFERENCE DIGEST will be a real breakthrough. Thanks to the encouraging initial response, we are now able to offer an optional Budget Plan, which we hope will make the REFERENCE DIGEST accessible to more people.

Publication of this major new reference work is now tentatively scheduled for early June 1983, slightly later than originally planned. We plan to follow soon afterward by inaugurating an entirely new service built around a periodic, printed report. Until then, we plan to release brief "News Alerts" like this one concerning events which appear to be moving too fast to wait for the new report series.

IN THE TEXT BELOW-- Background references to issues of the Dr.  Beter AUDIO LETTER are indicated by numbers in parentheses.     Example:    (#79) means AUDIO LETTER #79.

In his next-to-last tape (#79) last September 1982, Dr.  Beter reported that the Soviet Union was gearing up for a major campaign of weather warfare against the United States. Two major techniques were to be involved.     One was the technique by which huge artificial storms are generated at sea and guided to targets on land, first used in early 1980 (#54). By mid-1980, the magnitude of the storms which could be generated had grown to the level of full-fledged hurricanes, and the Russians were learning by trial and error how to guide them even in totally abnormal paths (#57). The other technique which was being activated as of last September was the newer "Siberia Express, " by which huge bodies of cold Arctic air can be transplanted to target areas in the United States or elsewhere (#71).

Events this winter have borne out the accuracy of Dr.  Beter"s warning last fall.     At the time of that report, a preparatory cool-down of North America was underway--and the West Coast had just been hit by one hurricane and was bracing for another.     Hurricanes are, of course, normally associated only with the East and Gulf Coasts, not the West.     To have two in a row in the west was abnormal in the extreme.

The artificial storm techniques revealed long ago by Dr. Beter (#54) leave a telltale aftereffect: huge areas of warmer-than-normal water in mid-ocean.     Sure enough, by mid-November 1982 there were little-noticed news reports of great "puddles" of abnormally warm water in the mid-Pacific west of the United States.

On November 24, Hurricane Iwa crashed into the Hawaiian island of Kauai, packing 100-mph winds.     By some estimates it was the worst hurricane to hit Hawaii in a century, leaving behind $100 million in damage as it pounded eastward toward the U. S. mainland.

Some 5 years ago, Dr. Beter reported in detail (#26, #33) that the Soviet Union had begun blinding America's military eyes in space by blasting our spy and early-warning satellites. Last November 28, the blinding extended for the first time to weather:  our Pacific weather satellite, orbiting at the same geostationary altitude as early-warning satellites, "failed. "

Two days later the storm slammed into the West Coast at just below hurricane strength, with little warning from the suddenly blinded National Weather Service.

As the decaying giant storm system continued inland, "Siberia Express" air was used--not for frigid temperatures--but to revitalize the storm.     The result: unseasonal tornadoes and the worst December floods in history in the Mississippi Valley.     But the main focus was and is the West Coast.     And the worst could be yet to come.

In the spring of 1977 Dr.  Beter began reporting (#23) the planting of Soviet underwater nuclear mines in reservoirs where they can destroy dams on remote command.    This would be most effective with reservoirs brimful, as they are now.    The cause could be disguised by flash floods from melting of overburdened snowpacks or by an artificial earthquake (#24).

It is not yet clear whether these options which have been readied by the Soviet Union are for intimidation or actual use in the near future.     Either way, they are a response to the war intrigues by the expelled Bolsheviks from Russia who now dominate America's military (#79)-     Meanwhile, what is our own government doing about this threat to public safety?

On March 8 President Reagan redoubled the kind of war talk which, with the war prepara­tions that back it up, have led to this winter's devastating weatherwar by Russia. He tickled the ears of a meeting of churchmen with some pious-sounding platitudes and then urged them to preach the Administration's pro-nuclear weapons line from their pulpits. Rev. Jerry Falwell promptly parroted this line, quoting Jesus' beatitude "blessed are the peacemakers" as his reason why weapons which can destroy the earth should not be frozen.

The Lord Jesus Christ told us that "the tree is known by its fruit. "    Whatever we may think about Russia's new leaders and their actions, they are not our responsibility: our own leaders are.     And they are not reducing the danger of war, but increasing it.     Until that "fruit" is replaced by something better, we must not be taken in by mere words.

The underlying forces behind many current events--and many events to come--have already been made public by Dr.  Beter through his 80 AUDIO LETTER tape reports.     The new REFERENCE DIGEST will give you instant access to that information,  in condensed and systematic form.     While your neighbors may scratch their heads over new sur­prises and shocks in the news, you will often be able to find important clues to what is really going on in your copy of the REFERENCE DIGEST.

In order to make the REFERENCE DIGEST more widely available, we are now offering the following optional plan: 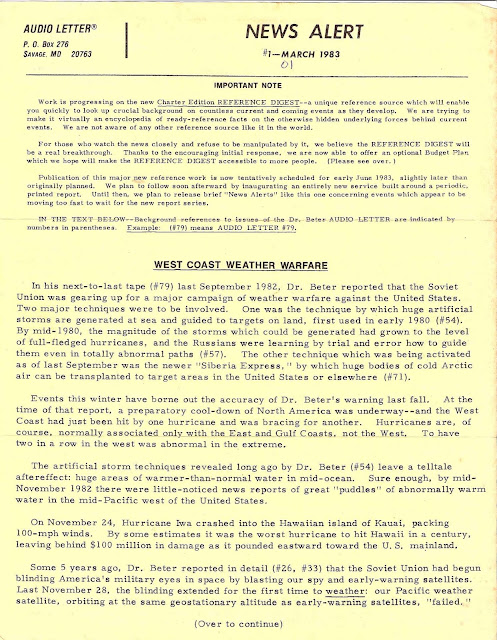