IN THE TEXT BE LOW- - Background references to issues of the Dr. Beter AUDIO LETTER are indicated by numbers in parentheses.     Example:    (#79) means AUDIO LETTER #79.


In October 1962 President John F. Kennedy drew a line in the dust against the Soviet Union over the attempted deployment of medium-range nuclear missiles in Cuba, right on America's doorstep.     Today, two decades later, a major confrontation is again brewing over the efforts of one super-power to deploy medium-range nuclear missiles on the other's doorstep.     But this time the missiles will be aimed at Russia instead of the United States, and the "doorstep" where the missiles will be deployed is Europe instead of Cuba.

Late last month on May 26, two days before the Williamsburg Economic Summit, President Reagan spoke to reporters from the other 6 Summit nations.     He insisted that deployment of new U. S. nuclear missiles in Europe "on schedule" this year is essential. . . supposedly to make the Russians decide to negotiate about arms control.

The reaction from Moscow was swift.     Thanks to the timing of Reagan's statement, the Soviet reply came on May 27--the eve of the summit itself.     The world press has focused on hints that Russia might counter the new U.S. missiles by putting nuclear missiles into East­ern European satellite countries.     Meanwhile the real warning, tacked on after statements about Europe itself, has been completely missed so far by major media commentators. Officials within the U. S. and other governments who do understand the warning message are keeping very quiet about it.     This key part of Russia's May 27 warning reads:

"It would also be necessary, as it has been repeatedly warned by the Soviet side, to take other necessary reply measures with a view to the territory of the United States itself."   (Emphasis ours.)


The behavior of the anti-Bolshevik Andropov Kremlin today is strikingly similar to that of President Kennedy two decades ago when the situation was reversed.   Like Kennedy then, the Kremlin today is saying it will not accept even one new offensive nuclear missile placed on its doorstep.     And just as Kennedy warned that any necessary retaliation would be directed at Russia itself, the Kremlin is now warning that its retaliation will be against the U.S. itself.

Last month on May 4 the Moscow correspondent for ABC-TV's World News Tonight quoted high Soviet sources as saying that if the U.S. missiles are deployed, Russia will "initiate a military response" that will be "directed against the United States itself, and not its NATO partners. "    And: "It would not involve nuclear missiles deployed on the ground in Central America. "    (Emphasis ours. )    What alternatives does that leave open?    Lately the Russians have given broad hints as to the answer... in the waters around Norway and Sweden.

Last October the Swedish Navy made headlines for two weeks or so by trying in vain to hunt down intruding submarines near Sweden's most sensitive naval installation on Musko Island.     It was all-out anti-submarine warfare, using the most depth charges expended by the Swedish Navy since World War II, and it was all within Sweden's own territorial waters. Yet not a single intruder was captured, much less destroyed.    And early last month it was Norway's turn: teased by periscope sightings, the Norwegians blasted the daylights out of the bottom of a fiord near Norway's most sensitive naval base.     Results: none.

On April 26 the Swedish government revealed part of the reason for the difficulty in fending off the intruders.     They reported that there had actually been, not one, but half a dozen subs violating Sweden's waters last October.    And they made public evidence that at least three of them were mini-subs of a revolutionary design that makes them virtually impossible to detect, let alone destroy.

This is the first public admission by any government that special mini-subs exist which can move in and out of the most heavily defended NATO waters at will, virtually invulnerable to detection.     Typically, this revelation did not come from the United States Government, which has kept a lid of secrecy on the story ever since September 1976, when Dr. Beter first described these special Russian mini-subs publicly (#16).

When Dr. Beter first reported on Russia's sonar-invisible mini-subs nearly 7 years ago, they were busily moving in and out of the territorial waters of the United States.    They were planting small, short-range, underwater-launch nuclear missiles within our territorial waters for reasons which did not become completely clear until later on (#20, #26).     We were in the midst of the Underwater Missile Crisis of 1976, about which--like the mini-subs--the United States Government has never bothered to tell the public.

The message of the persistent, daring Soviet intrusions into Scandinavian NATO waters is clear:    If the Reagan Administration insists on going ahead with deployment of over 500 new nuclear missiles on Russia's doorstep in Europe, the Soviet Navy is prepared to mount a new Underwater Missile Crisis around our own shores.    After 7 years the Russians have had plenty of time to develop and produce a whole new generation of better, more reliable, longer-range underwater missiles than those which they started planting in our waters in 1976. And these Russian nuclear missiles would not be deployed "on the ground" or "in Central America"--but underwater, along our own shores.


On May 3 Soviet leader Yuri Andropov said: "We are prepared to reach agreement on the equality of nuclear potentials in Europe, both as regards delivery vehicles and warheads.. . " And he added:    "I particularly want to stress that (under the new proposal) in the European part of the Soviet Union we would have much fewer medium-range missiles and warheads on them than before 1976, when we did not have SS20 missiles. "    (Emphasis ours. )

Those words are specific enough to say that Andropov is talking about big cuts in Soviet European-theater missiles.    Washington has obscured this fact by seizing upon Andropov's requirement that existing British and French nuclear missile warheads aimed at Russia be considered somehow in an agreement.     But look at the numbers:    By NATO's own estimates the European theater presently has about 300 British and French nuclear missile warheads, against 1100 Soviet warheads.     By offering to agree to "equality" in "warheads, " Andropov offered in effect to scrap 800 Soviet warheads unilaterally. And the last part of the quotation above emphasizes that this really is what he is saying.

On its face, Andropov seems to be offering exactly what President Reagan claims to want: not a "nuclear freeze, " but big reductions in nuclear weapons--especially Russian weapons. The Reagan Administration keeps insisting that it's just propaganda.. . a bluff.

Then why not call Andropov's bluff and take him up on his offer?    If it is a bluff, then Andropov will be forced to back away from it in ways that will be embarrassingly obvious to all.

The Russians have a well-deserved reputation as hard bargainers:   there is no reason to expect negotiations to be a snap, even if conducted entirely in good faith by both sides. But the Bolshevized "Reagan" Administration is making sure that no negotiations take place that could interfere with their plan to flood Europe with nuclear missiles aimed at Russia. The man now in charge of America's arms control machinery, hand-picked by Reagan and con­firmed by the Senate on April 14 after much Presidential arm-twisting, is Kenneth Adelman. His candid opinion of arms control negotiations was given publicly over 2 years ago (5/24/81) in a N. Y. Daily News column by Ken Auletta.    Adelman was quoted in the words (which he did not then dispute): "My policy would be to do it for political reasons.   I think it's a sham. "

"Sham" arms-control negotiations are just the ticket for the neo-Bolsheviks in the U. S7~ Government.   They are not really interested in establishing a "balance" in Europe, but rather a first-strike missile force for war (#37, #57).    So on May 29, under heavy U.S. pressure, the participants at the Williamsburg Summit--an "economic" summit--released a statement vowing that "the countries concerned will proceed with the planned deployment" of the new U.S. missiles if there is no arms control agreement to prevent it.

A mere four days later, early this month on June 2, a follow-up joint communique was issued by NATO defense mini­sters under prodding from U.S. Defense Secretary Weinberger. Aside from a footnote by Denmark, there was no reference to arms control at all.

The Reagan Administration is f.ond of striking sanctimonious poses as it leads us all down the path toward nuclear confrontation.

What ever happened to our Lord Jesus Christ's Golden Rule?--Do unto others (even Russians) as you would have them do unto you! 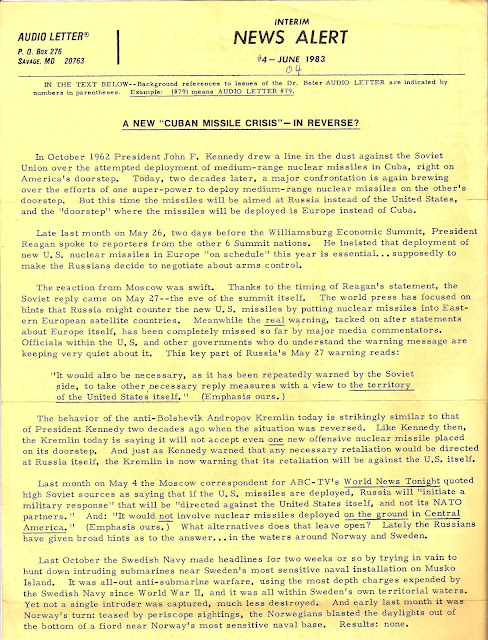 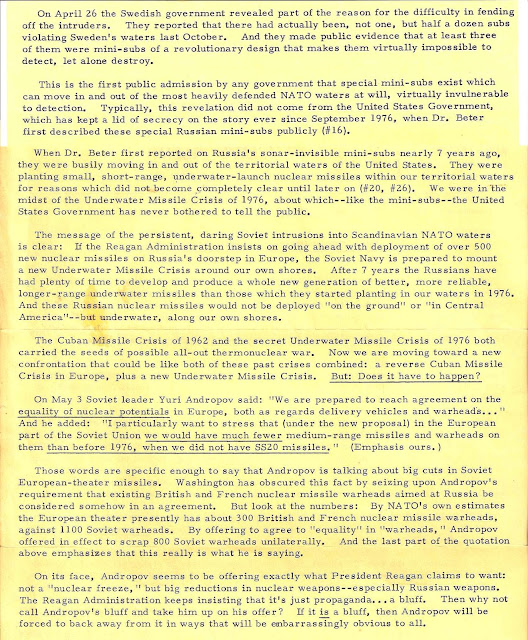 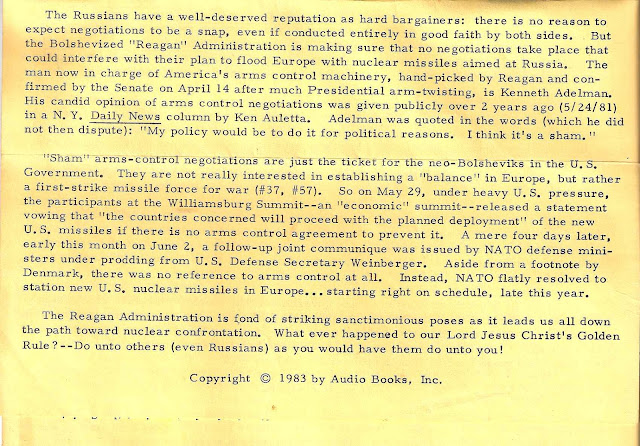