IN THE TEXT BE LOW--Background references to issues of the Dr. Beter AUDIO LETTER are indicated by-numbers in parentheses.     Example:    (#79) means AUDIO LETTER #79.


EARTHQUAKES AND THE 'POPE'S REVOLUTION" PLOT

In Interim News Alert #1 two months ago we alerted readers to the prospect of artificial earthquakes this spring in the same West Coast areas which have been ravaged this winter by Soviet weather warfare.   In addition to ocean-floor bombs for earthquake generation (#24, #25), Dr. Beter reported in the summer of 1978 (#37) that similar bombs for that purpose were also being planted in abandoned mineshafts and caves in southern California. By late 1978 he reported that at least 46 of these had been planted (#41).

Man-made earthquakes are not restricted to normal earthquake zones, and they give no advance warning. Early this month on May 2, the small town of Coalinga in the western part of California's San Joaquin Valley was smashed by a sudden strong earthquake. It was not preceded by any of the advance warning signals that normally indicate an imminent quake. And Coalinga is not on the San Andreas Fault where quakes normally are centered, but some 20 to 30 miles away in an area where quakes ordinarily do not originate.

Dr. Beter revealed in September 1978 (#38) that the type of Soviet earthquake-generating cobalt bomb planted underground in California are designed to produce earthquakes with a usual strength of around 6. 5 on the Richter Scale.   The Coalinga quake measured about 6.5.

Many earthquake generators have already been set off over the past several years accord­ing to Dr. Beter's AUDIO LETTER reports, loosening up the giant San Andreas Fault. Coal­inga is midway between San Francisco and Los Angeles. . . and since the earthquake there, geologists have discovered that the San Andreas Fault is locked mainly at two remaining points.     Those points are areas near San Francisco and Los Angeles.    Should they be un­locked allowing the fault to move, California's two greatest cities could be devastated.

Will it happen?   The answer could well hinge on developments brewing in Poland.

In August 1978 (#37) Dr. Beter alerted his listeners to watch for an imminent dramatic change in the Roman Catholic Church.     America's unseen rulers were initiating a power play to turn Vatican policies in a strongly anti-Russian direction.    A month later, the brand-new Pope John Paul I died suddenly... murdered, reported Dr. Beter (#39).     The man quickly chosen to succeed him as Pope John Paul II was the first non-Italian Pope in 455 years. .. from Poland.. . known for his reputation of "standing up to the Russians. "

In January 1979 Dr Beter gave details of a plan to capitalize on the new Pope's image to set off revolution in eastern Europe,,     The Pope was scheduled to go to Poland that May. during a highly emotional religious celebration,,     The secret plot called for the Pope to killed in vio­lence which would be blamed on the Warsaw government, triggering the "Pope's Revolution. "

That plan was de-fused almost at the last minute by delaying the visit a month.     The next strategy for revolution in Poland was to create the Solidarity labor union movement. Thanks to massive outside financing and support funneled through church channels, Solidarity was on the brink of success in setting off revolution when martial law was declared in December 1981.

Now another papal visit to Poland is scheduled, set for mid-June.     The "Pope's Revolu­tion" scheme has been revived, this time with linkages to the outlawed Solidarity movement. As the papal visit draws near, there is an air of steadily mounting confrontation in Poland, with Solidarity and Church leaders banding together against the government.     In April, Church spokesmen agitated for amnesty for all remaining Solidarity prisoners, while former Solidarity leader Lech Walesa goaded the government by telling the world he had met with fugitive underground Solidarity leaders.     The government picked him up for questioning, but refused to take the bait and arrest him.  Instead they did the opposite and gave him back his old job at the Gdansk Shipyard.


This month, with the papal visit getting closer, the situation has heated up further. The Solidarity-sponsored May Day and Constitution Day demonstrations turned violent in many cities.     One young Polish worker was found dead at the scene of one riot; no one had seen what happened to him, but he has been held up as a martyr to government repression anyway. And on May 3 the government was given a new black eye that also raised the specter of vio­lence to Catholic Church leaders.     Thugs broke into a convent which has been used as a Solidarity aid and information center, claimed to be police, then smashed medical supplies and beat up 6 church workers.     Warsaw was quickly consumed by a firestorm of rumors that government factions opposed to the upcoming visit of Pope John Paul II were behind it all.

The Polish government and its Kremlin sponsors want very badly for the papal visit next month to go smoothly. If it does, it can help reduce tensions, improve relations between Poles and their government, and pave the way for better conditions overall in Poland. But the American-based Bolsheviks are determined to regain their lost power over Russia, and they are setting the stage for an attempt to twist the Pope's visit into a trigger for revolution ...the "Pope's Revolution."

The forces that control the military and foreign policies of the Reagan Administration are trying to put Poland to the sword as a tactic for power.     But as our Lord Jesus Christ taught long ago, those who live by the sword will die by the sword.     If the Pope's Revolution plot succeeds, the Coalinga earthquake suggests that the Kremlin is ready to retaliate by means of geophysical warfare.  Russia's rulers will have their hands full if revolution erupts in eastern Europe. . . but if they do, America's rulers may well have their own hands full with the largest earthquake disaster in American history.

Each issue of the Dr. Beter AUDIO LETTER cassette-tape intelligence report which is referenced in the above News Alert is available directly from: 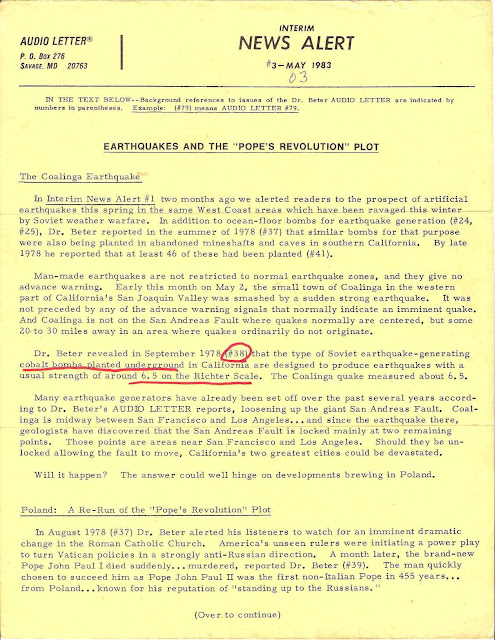